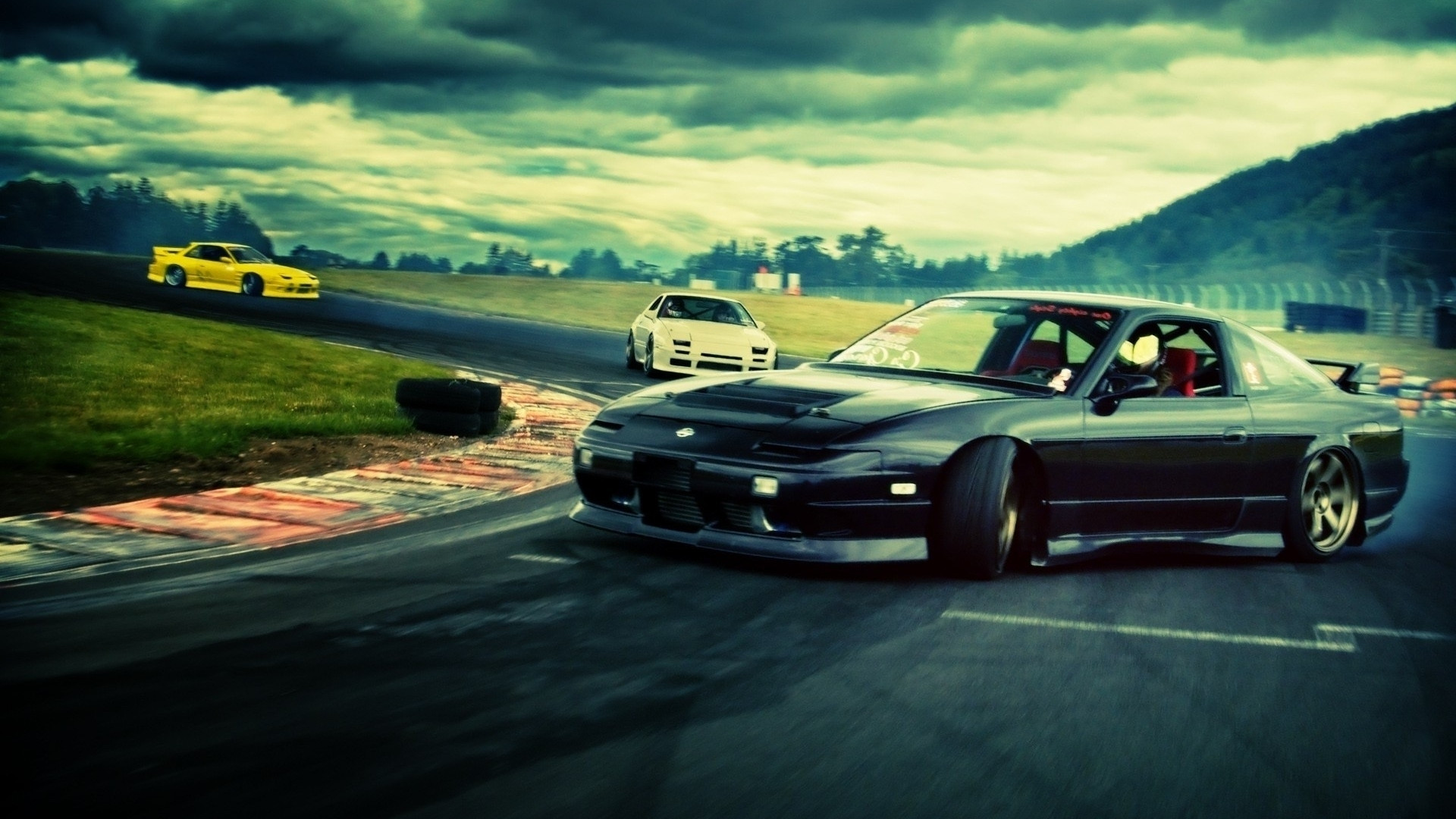 Here you will find a detailed description of terms used in drifting, as well as a breakdown of the rules and basic judging criteria for most drifting competitions.

DRIFTING - Drifting is a driving technique, in which a driver breaks the rear wheels out of a gripping position and counter-steers the vehicle around turns to keep the vehicle in a sideways position while maintaining forward motion.

Competition DRIFTING - Competition Drifting is using this driving technique, in which a driver breaks the rear wheels out of a gripping position but counter-steers the vehicle around a course marked by clipping points, clipping zones and touch-and-go areas. Judges dictate the desired line throughout the course, and highlight specific areas of importance and determine the scores each driver earns on their runs.

JUDGES - There are typically 3 different judges for a drift event. Each judge is responsible for 1 of the 3 different aspects that runs are judged on (line, angle, style) during qualifying. The judges are responsible for relaying the desired line, angle, and style requirements to the drivers during the driver's meetings. They use this criteria to dissect each qualifying run, and determine who will be the top qualifiers that will then go on to the tandem part of the competition.

LINE Judge - The drift line is defined as the ideal path a vehicle must take on the course. The line is marked by inner clipping points and outer clipping zones. The exact line of each track will be stipulated by the judges, and are designed to often push the driver to use the entirety of the course from "wall to wall". The 'LINE' judge will assign points based on how well each driver followed that prescribed line.

ANGLE Judge - A single judge will monitor the overall slip angle that the driver uses over the course of the qualifying run, rewarding the driver with more points for pushing the limits in as many places as possible. Steering adjustments should be minimal mid-corner, and transitions should be smooth from one corner to the next to maximize points. The 'angle' judge will award points determined by how well the driver performed those angle duties thoughout the run.

STYLE Judge - The 'style' judge will monitor 3 specific subcategories: initiation, fluidity, and commitment - each worth a maximum of 10 points. Initiation should happen as early as possible, with a quick rate of angle and without and major corrections. Fluidity will ensure that the drivers keep their car smooth and settled at all times, without any steering corrections, and allowing the car to pivot smoothly from lock-to-lock through the transition areas. Commitment will monitor the throttle application and maintaining pace, with encouragement placed on making the run look 'dangerous' by approaching barriers and the track edge with confidence.

STYLE - Style is comprised of 3 separate criteria: Initiation, Fluidity, and Commitment, described below.

Initiation - The act of breaking rear wheel traction while increasing the angle of the vehicle in relation to its direction of travel, while adding counter-steer to maintain the angle attained. Techniques include clutch-kicking, pulling the hand brake, weight transfer, and a combination of 2 or more of these techniques.

Fluidity - How smoothly a driver is able to move their vehicle through the course. As the car transitions from high angle in one direction to high angle in the other direction. The rotation should be affortless and graceful, without any jerky movements, bobbles or hesitations. Once at angle, the car should remain settled and in control until the next transition.

Commitment - How consistent a driver can be while negotiating the course in terms of throttle application, maintaining pace and using momentum to fill outside zones and touch-and-go areas. Commitment also refers to the level of confidence and dedication displayed by the driver when approaching track edges and barriers, keeping in mind the use of throttle, pace and momentum mentioned above.

QUALIFYING - During the 'qualifying' portion of competition, each driver gets 2 runs to impress the judges by closely adhering the criteria they set forth in the drivers meeting about clipping points and zones, driving lines, etc...These 2 runs are judged for their line, angle and style, and the driver will recieve points based on how well they negotiated the course while following the guidelines set. After all drivers have completed their 2 runs, the judges pick the Top 16 or 32 qualifiers based on the points they got on their qualifying runs. Those Top 16 or 32 drivers will then compete in a bracket style run tournament, and then they will begin the 'tandem' portion of the drifting competition.

IN QUALIFYING, the following mistakes will result in a score of '0' for that run:
*Spinning out
*"Opposite Drift", or drifting with the oposite angle required at that point of the course.
*1 tire or more, going off the track more than once during a run.
*Hood, hatch and or doors open during a run.

TANDEM - When 2 cars are drifting on the course simultaneously, in close proximity to one another.

TANDEM BATTLES - Tandem Battles are judged based on the combination of BOTH runs! Tandem Battles will consist of each driver leading one run, and each driver chasing one run. On the lead run, the driver is expected to adhere to the qualifying requirements and push for a perfect 100-point run. While following, drivers will push to maintain proximity and pressure the leading car as closely as possible while maintaining angle, line and style. The chase driver should mimic the lead driver's line and angle as much as possible while making as few corrections or mistakes as possible.
After 2 runs, the judges will refer to their notes and pronounce the winner as being driver A or driver B, whichever they think performed best in BOTH the chase and lead positions. In the event of a tie or no CLEAR winner, the judges will call for a "One More Time" and they will go again to find a CLEAR winner. While passing is allowed, it is ONLY when the lead driver has gone completely offline at the inside clipping point. The new lead driver would then need to finish his run without mistake.

IN TANDEM BATTLES, the following mistakes will result in a score of '0' for that run:
*Contact to the other driver that is considered avoidable or unsportsmanlike.
*A chase driver not intentionally chasing the lead car through the course after a Zero was scored on the previous run.
*Hitting one or more chicane cones on 3 separate, consecutive starts.
*Being passed legally by the chase driver.
*Spinning out
*"Opposite Drift", or drifting with the oposite angle required at that point of the course.
*1 tire or more, going off the track more than once during a run.
*Hood, hatch and or doors open during a run.

One More Time - At the conclusion of each tandem battle, the judges vote individually for either Driver A or Driver B, depending on who they feel was the more dominant driver in both the lead and chase positions. Should the judges feel that neither driver exhibited a CLEAR advantage over the other, they can also vote for a One More Time in which the drivers repeat their runs from both positons so that a clear winner can be chosen.

CLIPPING ZONE - An area, generally on the outside of the course along the edge of the pavement or along a wall or barrier, that has been clearly marked and is used as a reference for both line and angle judges to judge competency in their respective criteria. Drivers are required to place the rear of their vehicle in between the cones for the length of the zone while in drift to recieve a score from the line judge, while the angle judge will score each vehicles angle as it passes by each of the clipping zones on-track.

CLIPPING POINT - A point on the track, generally on the inside of a corner, that has been clearly marked and is being used as a reference for both the line and angle judges to judge competency in their respective criteria. Drivers are required tp pass the cone with their front bumper as close as posible to recieve a score from the line judge, while the angle judge will score each vehicle's angle as it passes by each of the clipping points on-track.

Touch-and-Go - An area, generally on the outside of the course along the edge of the pavement or along a wall or barrier, that has been clearly marked and is used as a reference for both line and angle judges to judge competency in their respective criteria. Unlike a clipping zone, which needs to be filled entirely by the rear of the vehicle, a touch-and-go area only requires the driver to briefly "touch" the area between the cones with the rear of the vehicle, as the name implies.

PASS - When a chase vehicle goes by a lead vehicle during a tandem battle. A pass is ONLY considered legal if it was performed at a clipping point, the lead vehicle was offline and if the chase vehicle remained on the line stipulated at the driver's meetings.

STRAIGHT - When a vehicle loses angle to the point that it is traveling in the direction in which it is pointing and the driver must reinitiate to continue drifting.

OPPOSITE DRIFT - When a vehicle attains angle in the opposite direction of what is stipulated for that area of the track.

BOBBLE - When a vehicle is in a sustained drift and there ia a sudden slight loss or increase in angle, followed quickly by a return to the initial position.

UNCHASEABLE LEAD - When the lead driver is making multiple corrections while their angle varies wildly and/or they are not able to follow the prescribed line around the course and/or they put one or more tires off course multiple times during the run. In this situation, the chase driver does not have the chance to gain proximity or mimic the poor driving demonstrated by the lead driver, making their job very difficult. 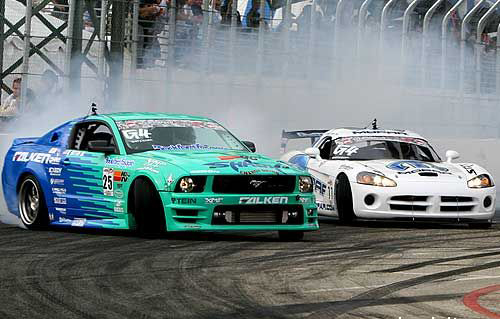 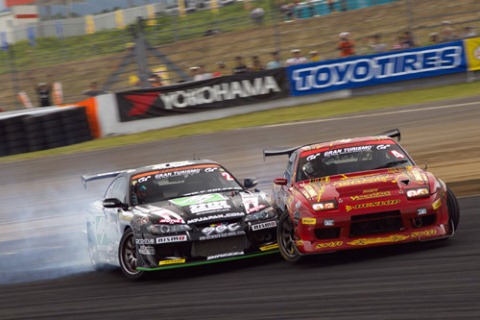