Drifting 101
History of, and how to drift!

Here we will explain a little bit of the history behind drifting, and a few different techniques on how it is done. 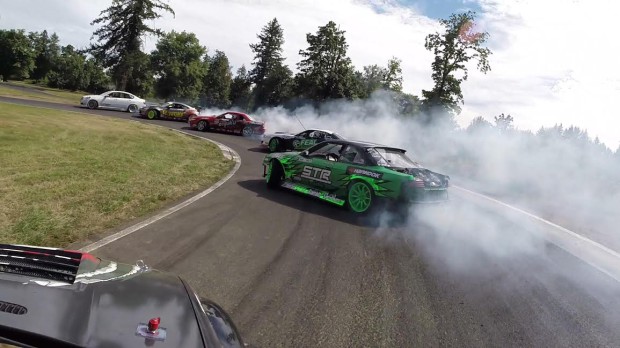 Drifting is really nothing new. If your car's rear end has ever swung around on a wet road, and you've struggled for 50 feet to get control, you've drifted. Even in car racing, drifting is pretty old hat. When race car drivers go around a turn at high speed, especially in the early days of racing when tires didn't have the grip they do now, the back end would sometimes swing out. That car would either spin out or the driver would recover from the drift and keep moving forward. Today, even with tires that could probably grip a vertical wall, the ability to drift without spinning out is an enviable skill in racing. The best drivers can control a drift so they can use it to their advantage -- a driver who can take a "non-ideal" path through a turn and brake late, causing the car to lose traction through the turn, has far more opportunities to pass than a driver who can't manage a drift.

"Drift racing" was born on the winding mountain roads of Japan in the early 1990s, and it has been spreading around the world ever since. A simple 'drift' is when a car is moving sideways through a single turn, while maintaining their forward momentum, but it can get much more complex than that. At the pro level, drivers drift through several opposing turns without their wheels ever gripping the road. That's where those winding mountain roads come in -- aside from the death factor, mountain roads are ideal drifting courses. The multiple, tight, S-type turn configurations allow drivers to display the most advanced drifting skills.

There are two primary techniques that drivers use to initiate a drift: clutching and braking. Drifting almost always requires a rear-wheel-drive car; it's possible to drift using a front-wheel-drive car, but it's relatively rare. In a common clutch-initiated drift, as the driver gets near a turn she'll push in the clutch and drop to second gear. She'll then rev the engine up to about 4,500 rpm. When she releases the clutch, there's a huge surge in power to the wheels because the engine is spinning so quickly. The sudden power dump makes the back wheels spin so fast they lose traction, and the back end swings into the turn. In a basic braking technique, the driver pulls the emergency brake as she enters a turn, causing the back wheels to lock up and lose traction, initiating a drift. This type of brake-initiated drift is one of the only techniques you can use with a front-wheel-drive car. In a rear-wheel-drive car, there are at least a dozen possible drifting techniques, and pro drifters often use several in a single run.

Once a drift is initiated, the really hard part of the sport begins. Holding a drift instead of spinning out requires a lot of practice. Expert drifters use a combination of throttle (accelerator) control and steering motions to control a drift, not allowing the car to straighten out, regain traction or slow down through the turn. The best drifters can maintain a drift through several turns in a row. That's a pretty high level of drifting skill -- those drivers can expertly execute multiple techniques one after the other to maintain extended control of a drift. In the next section, we'll check out the physics of making a car drift and the many different drifting techniques you might see on the pro drifting circuit.

The first drifting technique a driver needs to master is actually a regular racing technique. Heel-and-toe shifting lets a race car driver downshift smoothly and quickly (to increase rpm) while simultaneously braking (to shift the car's weight forward). The goal of this shifting technique is to maintain equilibrium between engine speed and wheel speed so the drivetrain doesn't jolt while downshifting. To heel-and-toe downshift while your right foot is on the brake, you depress the clutch with your left foot, shift to neutral and release the clutch. Then, keeping the ball of your right foot on the brake, you move your right heel to the gas pedal and rev the engine until the rpm matches up with wheel speed (usually an increase of about 1,500 rpm per one-gear downshift). Once you reach the proper rpm, you get off the gas pedal, still applying the brake, push in the clutch again and downshift. Once a driver can execute proper race-style shifting, she's ready to master some drifting techniques.

More Drifting Techniques:
*Power-over drift - The driver accelerates into and through the entire turn to make the back end swing out as the weight shifts on exit. This technique requires a lot of horsepower.
*Feint drift - The driver steers the car to the outside of the turn on the approach, pushing the car's weight to outside wheels. She then quickly steers back into the turn. When the car's suspension kicks back, the weight shifts so quickly that the back end flicks out to initiate a drift.
*Jump drift - Entering a turn, the driver bounces the inside rear tire over the inner curb to shift the car's weight to the outside wheels and induce traction loss, initiating a drift.
*Dynamic drift (Kansei drift) - Entering a turn at high speed, the driver suddenly releases the gas pedal to shift the weight to the front wheels, initiating a drift as the rear tires lose traction.
*Swaying drift (Manji Drift) - A swaying drift is a lot like a feint drift except that it begins on a long straightaway approach to a turn. Once the car starts drifting, the driver uses steering to maintain the drift in the form of a side-to-side swaying of the car's back end.
*Dirt-drop drift - The driver drops the rear tires off the race course into the dirt. This technique helps initiate a drift, maintain speed to hold a drift through multiple turns or increase the drift angle (see the next section) during a single turn.

As you can see from the above techniques, drifting is not the most natural thing for a car to do. To get a car in good shape to drift, and to keep it in good shape as a drifting car, there are many modifications that a driver can make to their car. These can include adding horsepower and upgrading the engine's cooling system to handle the increased stress and power needs, tightening the suspension to help with the weight-shifting drift techniques, and installing a limited-slip differential so the driver can control the car while drifting through more than one turn. A limited-slip differential lets the car transfer torque to whichever wheels have traction, whether that's one or all four. The driver will usually disable any traction control and/or anti-lock-brake systems so the tires can more easily lose traction, as well as inflate the tires to about 10 psi above normal pressure to decrease their grip on the road. Since the rear tires on a drifting car can get burned up in just a handful of drifting runs, drivers typically put good tires on the front and cheap tires on the back. Tires are by far the biggest expense in the sport of drifting.

Unless you're buying a whole new car to drift, that is. When considering a good drifting car, you're basically looking for a rear-wheel drive, lightweight car that's relatively inexpensive (cars can get pretty beat up on the drifting circuit). Other qualities that make a nice drifter include a high front-to-rear weight ratio, good horsepower and a light flywheel so the engine revs easier. Some of the more popular drifting cars include the Toyota Corolla AE86 GTS, the Nissan Silvia S13 or S14, the Nissan 180SX, the Nissan Skyline GTS-T, the Nissan Sil-Eighty and the Mazda RX-7 (Japanese cars tend to be lighter in the rear than others). You'll actually find a pretty wide range of cars at most drifting events, including European and American models. Most pros will tell you that with the right level of skill, you can make any car a drifter.

Now go out and have some fun, and get to drifting.
And remember, never lift! 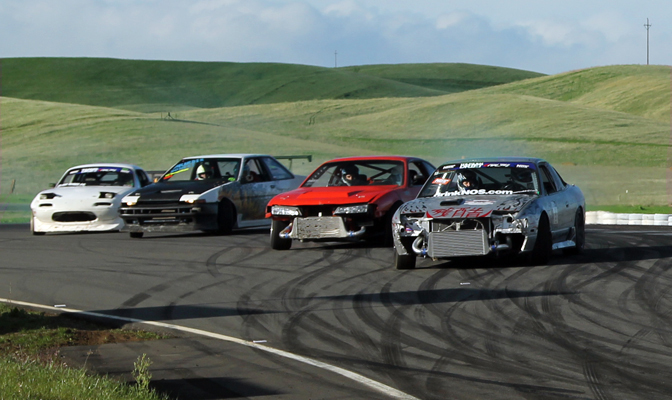 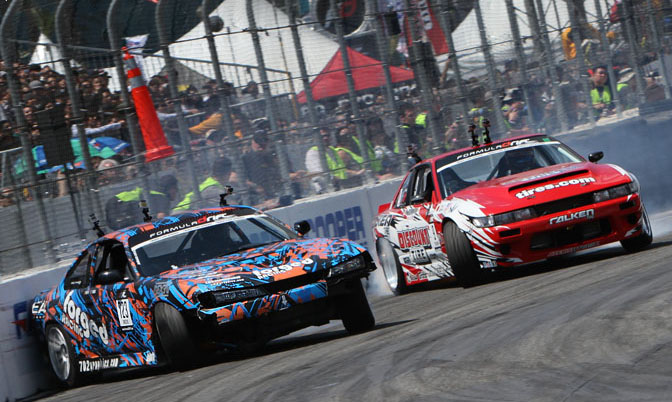